From the monthly archives: "September 2004"

whats my spider?
Hi, I saw this particular spider last year around this time and this year I see what seems to be the same spider as before. What kind of spider is this and is it poisonous? 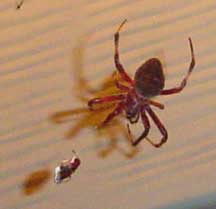 While all spiders have poison glands, your unidentified Orb Weaver from the genus Araneus poses no threat to you, however, it does seem adept at capturing and dispatching small winged insects.

Giant Lichen Orbweaver
What's That Bug? does not endorse extermination

Featherlike bug
Recently, i noticed some tiny bugs on a clean towel that i picked up from our bedroom wardrobe. After that, i examined all the clothes in our bedroom closet and discovered quite a lot of these bugs, most of them on clothes made from wool or cotton. It was almost impossible to get rid of them because they were hardly seen, so we took all of our clothes to the laundry. Their size is from 2 mm up to 7 mm that is 1/12" up to 1/4" inches (so i guess that the guy on the photo must be their… king). Later on that day, i discovered their… kingdom. A knitted carpet of wool, carefully stored in the wardrobe closet but not inspected for a long time, was covered all over of these bugs, so much that you couldn’t make out the drawing on it. Can you please tell me, what’s that bug and what caused the presence of it? Finally, is there a way to prevent this situation to the future?
Thanks for your help.
Babis, Greece 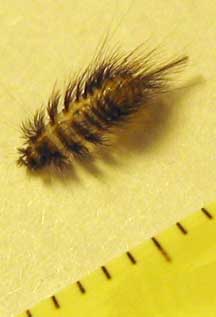 Dear Babis,
There is a reason your insect was discovered in the carpet. It is the larval form of a Carpet Beetle, Family Dermestidae. By now you must realize that they will destroy a fine wool rug that is being stored. They will also infest wool clothing, get into suede and leather, ande they are responsible for horrific damage to museum collections.

Spider Beetle
What's That Bug? does not endorse extermination

Can’t quite figure this one out…
Hello Mr. Bugman!
I love your site and you’ve done a great job cataloging and explaining to people what bugs they have been lucky enough to photograph or see. I searched and couldn’t find out about my bug. I suspect that it’s a bagworm but i’m not sure. I live in St. Petersburg, Florida in an older wood framed house. We have lived her for 2.5 years and i’ve never seen this insect until the past few weeks. I’ve seen probably a 8 or so. They are usually >crawling up a wall – inching their way up pulling this sandy very flat sack like thing behind them. In the photos I’ve attached, I placed in on my bathroom sink to get a better shot. He has some lint attached to >him from the baseboard. I didn’t measure this one but another one I just found is about 1/8″ and he was smaller than this one. I would appreciate any feedback if possible.
Thanks so much!
Mo Eppley 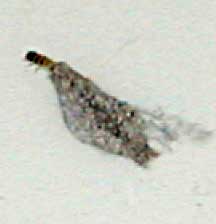 Hi Mo Eppley,
You have Case-Bearing Moth larvae. We have additional information on our clothesmoth page. The small larvae carry a noticeable case made of fine sand and debris. The case, which is about a quarter to half an inch long, is flattened on top and bottom, expanded at its center and tapered at both ends. They are often found on walls (both outside and inside) of houses and other structures. Larvae are said to feed primarily on insect remains, fur, flannel, and hair: they do not seem to be a clothes pest. We have gotten several letters from Florida regarding Case Bearing Moths.

Case Bearing Moth Larvae from UK
What's That Bug? does not endorse extermination

Ed. Note: Mike Zellers, former Homebody of the Month, just sent in this photo of a Stag Beetle. We love the interesting “bug’s eye view” perspective. 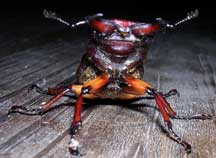 Giant Stag Beetle
What's That Bug? does not endorse extermination

What is it?
I new one for me….a beetle larvae? 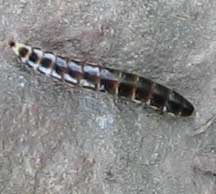 We can’t identify your beetle larva more specifically, but one of our beetle experts will probably eventually write in with something more concrete.

Orchard Spider
What's That Bug? does not endorse extermination

RE: phallus or stinger…but on a beetle?
Hello, I love your site.
I found this guy while I was walking in our office parking garage. A friend here at work said “beetles don’t have stingers” so, I guess it could be a phallus. It most closely resembles what you have described on your site as a California Prionus beetle, but the pics you have don’t show a stinger. What is this bug, and what is the pointy-thing?
Thanks,
Courtney Cavness, Austin Texas

Hi Courtney,
Yes your beetle does look like one of the Prionus, but beetles do not have stingers, and the appendage is not a phallus either. We suspect it is an ovipositor since this type of beetle lays eggs in trees, but we will turn to an expert, Eric. Below is his response:

Dear Daniel:
Had to laugh at this one:-) This is indeed another prionid longhorned beetle, but it is a Stenodontes sp. (or what used to be called Stenodontes anyway, I think they changed the name).
The funny part is that this is a FEMALE! The “stinger-phallus” is actually her ovipositor, what she lays eggs with in the crevices of bark. When beetles die, females often evert the normally retracted ovipositor. Who knows why?
Male Stenodontes resemble a prionid crossed with a stag beetle, as they have enlarged jaws (and can USE them, let me tell ya!). Looking forward to seeing the site back up in October. Oh, BUGGUIDE.NET had THEIR server crash, so they are temporarily out of commission also. Bad month! It should be running again by October, but you might want to check, and put a notice up to that effect if it is still not up when your site goes back online.
Take care.
Sincerely,
Eric

Longicorn from Malaysia
What's That Bug? does not endorse extermination