Polyphemus Moth Caterpillar We did a radio interview!

Three Bugs from near Sedona, AZ
The second photo is of what looks like a cicada, but at one inch long, much smaller than the annual (green) cicada that we had back in southwest MO where I grew up; it was also smaller than the periodical red-eyed cicada that we had there. (Boy, the bass went nuts for those!) The annual cicadas that I am familiar with get really loud with their "singing," while these little guys made clicking sounds. I thought there was an electronic bug zapper somewhere, but it was the clicking of a bazillion of these things. They were thick as thieves in the Oak Creek Canyon area just northeast of Sedona in June 2003.If you can identify any of these, I’d be grateful.
Su — Mesa, AZ 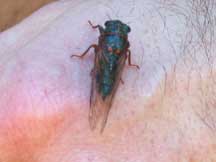 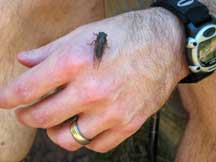 Hi Su,
Your Cicada could be one of several species. Often Western Cicadas are much smaller than the Eastern Cicadas you are used to seeing. The Small Grass Cicada, Okanagana minuta is just over 1/2 an inch in length. “The color varies,” according to Essig, “from straw or tan to black or a combination of these colors, and with orange or pink blotches at the bases of the wings.” Your photo seems to illustrate such blotches. Vanduzee’s Cicada, Okanagana vanduzeri, is a common species that reaches 3/4 inch in length. It is also shiny black with irregular orange markings.

Hey, I see you posted my bugs! I thought you might be interested in another bugman’s take on this cicada. See his response below.
Regards, Su Su Rogers-Fink
Su,
The cicada pictured is Platypedia putnami and this is a wing snapper. Usually they’ll sit in a bush in numbers and do as you described by manipulating their wings which snap (sometimes called crepitating). Oh we have lots of fancy terms for sound production. Beyond that I don’t know much of their life history. I imagine they stay underground from 1-2 years, then emerge just as others do. We have about 35-40 species of cicadas in AZ, none quite like the 17 year. But they are quite fun. Anyway it is little wonder nobody knew about this cicada because its presence just isn’t spectacular so it takes a good naturalist to find them. Enjoy. Well I just did a google search and have copied and attached an article about this cicada. Funny I found another website that had all incorrect info so if you search this is the correct story. And funny thing, it looks like I copied it to tell you in my words above. Carl
Platypedia putnami http://www.nku.edu/~hastings/New%20Mexico%20Web/pputnami.htm
P. putnami , is an annual cicada that emerges from May to June. Their habitat tends to be mixed coniferous forests, and seem to prefer elevations from 1200 to 3000 meters. The genes of Playpedia use a different mode of signaling compared to their cousins, such as in the genes of Magicicada. This genes as well as most others use an organ called the timbal to produce courtship songs. In Platypedia, this organ is vestigial. Hence it is believed that the acoustic signal produced by Platypedia comes from the slapping of its wings either against its perch or its abdomen and possibly a combination of both. Dr. Allen Sanborn published a scientific paper in the Entomological Society of America about the acoustic signal of Platypedia putnami . He describes their signal as a sound produced from slapping the wings against a perch or other vegetation, or otherwise known as crepitations. There is not much known about this species of cicada and ongoing research is being done to explore their ecology and behavior. This site is dedicated to the research that has been done and will be done on this species.

Thank you, Carl! Crepetation is the sound my knees make. Maybe the cicadas were responding to my knees. Really appreciate your time. Regards, Su Carl Olson

Cherryeye Cicada from Australia: First Cicada Photo of the season
What's That Bug? does not endorse extermination