mites?
Hello Bugman,
I just came over your site on the internet. I like taking macro shots of insect and today I have taken an interesting one. There are were some red dots on the wing of a dragonfly. I think maybe they can be some sort of insects or mites. I live in Hungary, Europe I hope you can help me anyway…
Best regards.
Ambruzs Péter 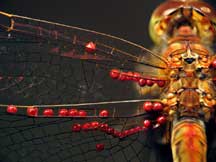 Dear Ambruzs Péter,
Your photo is beautiful. We suspect you have photographed the Locust Mite, Eutrombidium rostratum. Essig writes that it : “is the common locust mite of the United States and Europe. It is a large bright red species. … They are often taken on the body and wings of grasshoppers, crickets, katydids, and mantids, and do not attack humans.” Even if it is not that exact species, you have most definitely photographed mites hitching a ride on your dragonfly.

Update:  August 18, 2017
Thanks to several comments we have received on this very old posting, we now realize these are larval Water Mites.  According to Northwest Dragonflier:  “Although odonates carrying water mites typically appear to be healthy and energetic, studies indicate that their longevity, flying endurance, and reproductive success can be negatively impacted by the stowaways. This seems to be especially true when lots of mites cluster together and cause significant damage to the cuticle of the exoskeleton, perhaps leading to desiccation. I assume that clusters of mites at particular locations on the odonate body—until they drop off anyway—can also interfere with reproduction by impeding copulation or by blocking sperm transference to the male’s secondary genitalia. It seems that just a few mites attached to unobtrusive areas of the body have negligible impact, and it’s more of a commensal relationship in that case.”