What’s this bug?
This is probably a common bug but I’ve never seen one before. It was on my front door here in Philadelphia. Does it use the tail to attack? If so what kind of enemies would it face? Thanks guys!
eFertLIS 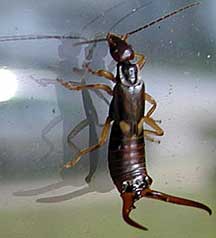 Dear eFertLIS
You have sent in a photo of a common Earwig. They fly and are attracted to lights. Those foreceps can give a mild nip, but will not break the skin. They are used to catch and manipulate prey as well as to fend off enemies. Your Earwig is male European earwig, Forficula auricularia. Trophy male with those forceps!

Earwig from Israel
What's That Bug? does not endorse extermination