this one bites me Hi. Pls. (!) tell me the species name. They have been biting my legs when I mow for too long now! They have hundreds of webs all over the lawn which are characterized by a funnel or cone down which they retreat.
Tnks! Shaun 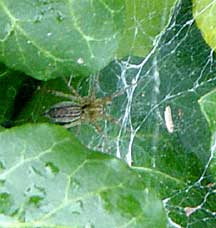 Dear Shaun,
Grass Spiders are members of the Funnel-web Spider Family, Agelenidae. Your spider looks like a Grass Spider, Agelena naevia. It is a large spider, often reaching an inch in length. They build abundant webs of the funnel type in grass, low shrubs and occasionally near buildings. Few people realize how many webs are in the grass until the webs are made visible in the morning by the dew. Grass Spiders live for a year and often occupy the same web unless it it disturbed. They have a retreat in the web, the funnel, where they hide until prey falls into the web. They then run accross the web and drag their prey into the tunnel, which often has a rear door if the spider needs to retreat. We suspect your bites have a different cause. Have you actually seen the spider attack you?

Thank you Daniel for this. While I have yet to actually see one bite me, I have to strongly suspect this may be the villain. I have two or more years track record of bites on my legs. No-one else in our family experiences this. This is an outdoor/a summertime specific phenomenon. After mowing I come in, and bites begin appearing that day and over the days following. Last year I had ten. I do not wish to repeat that. Almost all the webs (there were/are many) on the lawn, made visible by the morning dew as you quite rightly say, are of the funnel variety. What else would be doing this? As a person who is allergic to a number of things, I feel fairly confident this (correct me if I am wrong) relatively harmless villain is something to whose bite I experience an allergic reaction. There usually is a necrotic or cytotoxic reaction unless the bites are responded to promptly with effective medication. ‘Save me’ if my discomfort is pushing me into a rush to judgement or knee-jerk type of thing, although my thoughts on this ‘aggressor’ here is ‘if the shoe fits, wear it!’ Did you think of anything further in the light of all this? When the web page wouldn’t open (the error message said something to the effect of: ‘the site has exceeded monthly quotas,’ and that seemed to me to be odd as we are approximately in the middle of the month) I ‘googled,’ and google had a cached page. Scrolling down the left hand side ‘revealed’ your address, so this was how I was able to reach you. I was crushed when I had finally gotten the photo and couldn’t find the site, something I had originally done via a portal, the Microsoft Network or msn.com home page search utility. Cordially, Shaun

Hi Shaun,
While the Grass Spider is normally thought of as harmless, it is entirely possible that you have a sensitive reaction. All spiders have venom and all are capable of biting. Sadly, we are willing to agree with your theory.

Not True but False Widow

What Nested in the Pine Needles???