click beetle
Attached, photo of an “eyed” black and white beetle on the bark of an Arizona Ash tree, spotted (as it were) in Austin, TX on June 12, 2004. Perhaps an Eastern Eyed click beetle, Alaus oculatus?
Thanks for the great site, and service.
Jim 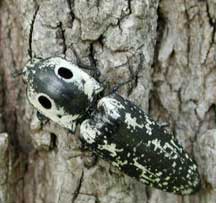 The Eyed Elator is surely a handsome Click Beetle. The scientific name is Alaus zuniatus (we aren’t positive on the spelling of the species name), found in the southwest. Thanks so much for the photo Jim. Keep sending us beauties.

Eyed Elater
What's That Bug? does not endorse extermination