Looked like a leaf
Found this bug sitting on the side of our building. At first, I just thought it was a leaf. Then I realized it wasn’t . Very nice disguise. Hope the pictures are clear enough to identify it.
Ellen Bouse 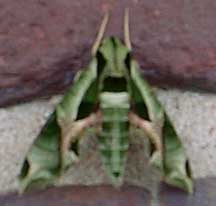 Hi Ellen,
The Satellite Sphinx, Pholus satellitia, has a form Pholus pandorus, which is your moth. According to Holland: “This insect which is widely distributed throughout the eastern United States, and ranges northward into southern Canada, is well-known to all growers of vines.” The caterpillar, a hornworm, can do damage to the vineyard.