Please identify this spider.
Hi,
These pics were taken in the corner of our non-airconditioned/heated warehouse, by my window. Sometimes during the spring my window gets partially covered in web. There are at least 4 or 5, from ceiling to floor(~30ft) hanging in the same corner. It looks like the daddy long-legs family, but I can’t find a picture to identify it anywhere. Most of them have a 1/4″-1/2″ body with legs spreading from 2″-4″. Late nights, with the light on in my office is probably keeping them near-by. These same spiders are all over the warehouse along the walls and under shelving. BTW, we’re in Wilmington, NC. We mostly want assurance that they’re not dangerous, since we’re running into them all the time. Thanks!
Glen 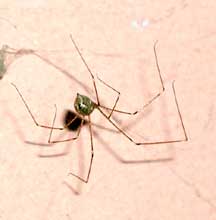 Hi Glen,
It looks like a Cobweb Spider, Pholcus phalangioides. According to Hogue: “This strictly domestic spider is another species imported from Europe. It is the major contributor to ceiling cobwebs and is common under eaves of homes in tree shaded neighborhoods. The spider is drab gray-brown, with an elongate abdomen;…. It’s very long slender legs and small rounded body give it a superficial resemblance to a daddy long-legs. When disturbed, it gyrates wildly in its web.” They are benign spiders.

Cobweb Spider
What's That Bug? does not endorse extermination