Identify this critter please?
I don’t know if I sent you this picture before or not, but I figured I’d try again in case I didn’t the first time. We found this guy motoring across our new carpet. It looked like a spider, but I don’t recall if it had 8 legs or not. It’s almost like a very large tick of some kind. I believe it was around 1/2" in size, give or take a little. We live in Atlanta, GA.
Any ideas?
Dave 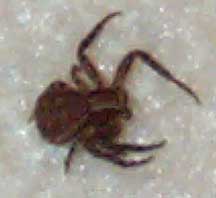 Hi Dave,
You have a species of Crab Spider, Family Thomisidae. They do not build webs but wait to ambush their prey, often flies and bees. Many species are found on flowers and they camouflage themselves to look the same color as the flowers. They are sometimes called Flower Spiders for that reason.

Hello Bugman!!
When I was a young lad I would often go fishing with my grandfather and in the hot days of summer we would often encounter "corn-tossel flies." In all actuality I have no idea what they are called, but I see them quite often and I have always been curious about them. I do not have any photos of them but I think I could describe them to you and you would be able to place them rather easily seeing as how they are a fairly common bug (in southern Illinois anyway).
The bug is obviously a fly of some sort that has an elongated and flattened body that is striped like a bee (yellow and black) and it has a head like a house fly (two large red eyes being the majority of its head). One thing I find to be very amusing is its behavior. The fly seems to hover much like a hummingbird, whereas your average fly would just zoom on by and land at its desired location, the "corn-tossel fly" (as my grandpa coined it) would hover over a certain location before deciding to land almost as if it were checking out the area to see if it would be ok to land on. Another amusing behavior it possesses is its way of landing on hand, arm, or leg and doing "the fly suck". Whilst doing "the fly suck" it will move about the immediate vicinity of where it decides to land and bob its little bee-butt up and down with every other step. When I first discovered these peculiar flies the motion of its butt reminded me of how a bee stings, and I used to think that it was in the process of stinging when this occurred.
If you could identify this bug and provide me with a little info on it I would greatly appreciate it!
-CTF guy

Dear CTF Guy,
We have never heard of a Corn Tossel Fly. It sounds like you are describing a Flower Fly, Family Syrphidae. The larvae eat aphids and other destructive plant pests. The adults eat pollen, which is why perhaps they are attracted to corn tassels. The only photo we have was sent by Daniel from Mexico City.

Tachinid Fly
What's That Bug? does not endorse extermination

Bug against the house
Found this guy next to the back door. It’s around 2 inches long, I believe. Didn’t want to get too close. What kind of bug is it? I’m located in Garland, TX. I’m within the Dallas metro area.
Thanks much!
Olga 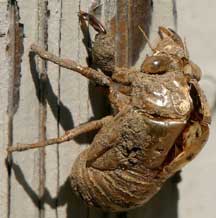 Hi Olga,
You have sent in a discarded skin from a Cicada. These large fly-like insects spend their nymph stage underground sucking nourishment from the roots of trees. Then they emerge from the underground, shed their skins and fly away. They make a loud buzzing noise in the hot days of summer. Some species, known as Periodical Cicadas or 17 Year Locusts, spend 17 years underground and emerge in great numbers, creating a deafing chorus. This year was the notorious Brood X year and large numbers of Cicadas were found in many eastern cities. Your specimen is probably one of the Annual Cicadas.

Daniel,
Thank you so very much for your response. I appreciate it very much. It was very kind of you.
Olga

Metamorphosis of a Cicada

Cicada from Brazil
What's That Bug? does not endorse extermination

BugMan,
I am hoping you can help me identify this bug. I have had several of them flying in my house and one has stung me (At least I think it was one like this, got me on the back of the neck, and since I did not see it and this is the only flying bug I have seen in my house I have given it the blame.) I know this is a picture of a dead bug and I really strive not to kill bugs but it was flying around in my daughters room and she would not calm down (4 years old would not stop crying) until it was dead and she could see it. So needless to say I was forced to kill it so I could sleep (Does this make me a bad person?). I live in Essex, MD, it was about an inch and a half long, 6 legs, long slender tail, big bug eyes, and 2 small antenna on its head (1mm maybe 2mm), one set of wings that were tan from top to bottom with only supports throughout no other coloring, and a small roundish buldge on the top of its back above the wings with stripes of brown and black. I am attaching 3 pictures to see if you can help identify it. Thanks for all your help.
Sincerely,
Matthew Rebbert 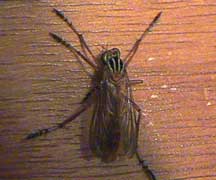 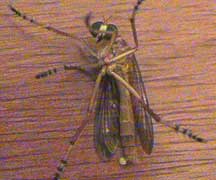 Hi Matthew,
Your insect is a Robber Fly, Family Asilidae. The adults are predatory, and are important in the control of many insect pests including Grasshoppers. The Robber Fly will attack insects much larger than itself. They are capable of inflicting a painful bite if carelessly handled, but they do not normally bite people. Robber Flies often find their way into homes. We would recommend trapping it in a glass when it alights on the window, and then releasing it. Show your daughter that the fly was taken outside so it could kill other bugs. Eric Eaton adds “Your specimen of Robber fly (reddish-yellow with black stripes) are Diogmites sp., the Hanging Thieves,” named for the way they suspend themselves from one pair of legs while feeding on a prey item.”

Probably Hanging Thief
What's That Bug? does not endorse extermination

California Caterpillar
Can you help identify this little guy? I found him on a cement wall in Santa Cruz county California.
Thanks Victor Morris 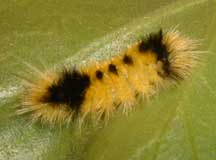 Hi Victor,
Your photo looks remarkably like a Spotted Tussock Moth (Lophocampa maculata).
The Caterpillars of the Eastern Forest site describes this caterpillar as being: “Black at either end with 4 or 5 orange abdominal segments. Numerous thin white lashes arise from black segments—these distinguish it from woolly bear, which it superficially resembles. Orange abdominal band broken by red or black middorsal tufts. Food: prefers willows and poplars but will consume most any shrub or tree. Caterpillar: July to September; 1 generation.”


And a picture of a 20th floor grasshopper

Hi Bugman,
Any ideas what this pretty looking caterpillar might be? I spotted him in south central Texas, and haven’t had any luck identifying him. I sent it to you a while ago but it probably got lost in the mix. For fun, here is a picture of a grasshopper I discovered hanging out 20 stories up. He spent a couple days hanging around my window, but finally got tired of staring at me and left.
Thanks bugman! Love your site!
Emily Heimerman
San Antonio, Texas 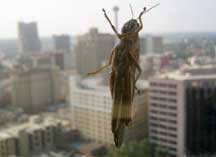 Sorry for the delay Emily,
We do not have an exact identification on your caterpillar. We suspect it is immature and often caterpillar photos are of the final instar before pupation. It is very common for caterpillars to change colors and markings between molts. We really love your image of the Highrise Grasshopper, which appears to be a member of the genus Schistocerca, which includes migratory locusts.