Extremely Large Beetle!!!!
Hello,
Although your site was informative and quite fascinating I was unable to identify a very large beetle. This beetle was actually found on my sisters shirt right at the base of her neck. I however spotted it before she could freak out too much… it was really quite hilarious to see her dancing around trying to reach it. I did of course pluck it off her and rescue the poor thing. I live in British Columbia, Canada and have not seen a bug like this before, and doubt that I ever will again. It was very sleek in body style and looked like it had a velvet shell and was soft to the touch. It was none aggresive and quite content to just sit on my arm. However if you touched it or prodded it would scurry with surprising speed on its padded feet. I believe it was about two inches long if not more… and was neat to watch. I got about 10 photos of it so hopefully you can help my curiosity by telling me what it is.
P.S. : I hope you like the photo, which I shall send in the email follwing!
Tracy Sherwood 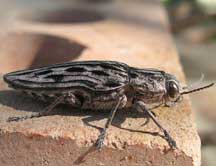 Dear Tracy,
I can’t believe you didn’t think I would love your photo of a Larger Flat-headed Pine Borer, Chalcophora virginiensis [*Correction: Chalcophora angulicollis]. It is a species common in pine areas. They are members of the Metallic Wood-boring Beetle Family Buprestidae. The larvae bore under bark or in wood, attacking either living trees or newly cut or dying logs and branches. Adults run and fly rapidly. I found a website which states: “Individuals may be seen resting on sidewalks, on walls, and may actually land on people, especially if they walk around in bright clothing. This may be quite disconcerting to those that are intimidated by large insects.”

Thank You ever so much for replying so quickly! And you are right it is definetly a large pine borer. And I am also happy you liked my pic! Just graduating from high school ( Grade 12) and am planning on following my dream of becoming a professional photographer, I am tickled pink to hear that you liked it! Once again thanks ever so much for helping me out! And thanks for the awesome and informative website!

*CORRECTION
Re: help identifying beetles when i looked at the beetle pix previously the only missID i saw was chalcophora virginiensis since the bug was from BC it should be c.angulicollis. no big deal u did a good job on the others but i would be very careful putting species names on any beetle because there r usually many closely related sp. in any given genus feel free to send me some puzzlers if u get any thx dan

Golden Buprestid
What's That Bug? does not endorse extermination


One Response to The Larger Flat-headed Pine Borer