Over the last weekend, we were in Parker, Arizona. A large bug landed on me which was very frightening. People there identified it as a ‘scorpion wasp’, but I can’t find any such bug on the internet. I don’t have a photo, but it had a large black body with some white or gray spots on the head, long legs, and a very long stinger (or what appeared to be so). It had large wings. Do you know of any such bug in this area? I’m concerned that if we visit there again, I don’t want my baby to be stung by this thing, if it was a wasp after all. I did notice too, that when it landed on the ground , it crawled around rather quickly.
Mrs. Trebesch

Dear Mrs Trebesch,
Might be a Tarantula Hawk, a very large wasp with reddish wings. They sting and paralyze tarantulas. Their sting is reported to be very painful to humans.

I did some more searching online yesterday after your previous message; despite the fact that I thought I saw black and white, I am certain it had orange wings and appeared black when flying/crawling and after review of some photos, I don’t have much doubt that it was a tarantula hawk wasp. The strange thing is, I thought it had stung me, but from the descriptions, it sounds like if it had, I wouldn’t be questioning! It didn’t hurt that much… maybe he/she just landed on my sunburn and made me think I got stung! Thanks for your help in identifying it!
Mrs. Trebesch
Sierra Vista Middle School
Room 17

Dear Mrs. Trebesch,
Though I have never been stung, I understand the sting of a Tarantula Hawk is extremely painful. I see big ones her in Los Angeles occasionally, but never as large as the ones I have seen in Mexico. They are actually beautiful wasps. Glad we could solve your mystery. We found a photo on this site.
Daniel 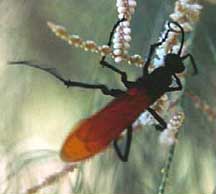 Wasp and Robber Fly from Oman
What's That Bug? does not endorse extermination