Hi.
Spiders, in general, freak me out. Your page makes me squirm and squint. I could use some help identifying a spider I found in abundance in my garage. The brown spider was with a dozen of his buddies… and dozens of eggs. They took over some shelves we had in our garage. I’m an over-protective new parent. Should this spider concern me? I also attached a spider that almost made my hair turn white. My wife and I came across it hiking in BVI. Is that thing poisonous?
Thanks
Scott 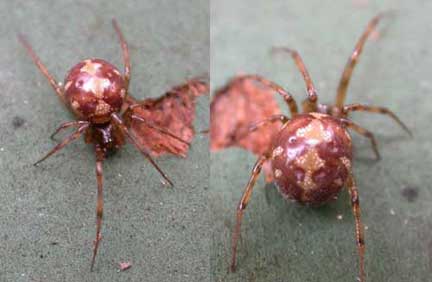 Hi Scott,
The brown spider in your home is Theridion tepidariorum, the most common of all house spiders. They spin a tangled maze of threads in the corners of neglected rooms. They are sedentary, spin webs to catch prey and to place their egg sacs. Off all the spiders that inhabit our dwellings, this is the most familiar, so it is sometimes called the Domestic Spider. It is exceedingly variable in color and markings. The female is larger. They are harmless.
The frightening spider from BVI (where is that?) is a silk spider called Nephila clavipes. They build enormous strong webs. They occur in the tropics and the American South. Your photo is the female which is about 100 times the size of the diminutive male. They may bite, but are relatively harmless. They are sometimes called Banana Spiders, but that is a common name used on Giant Crab Spiders as well. 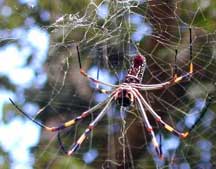 Correction:  May 21, 2014
Just a few weeks shy of the tenth anniversary of this posting, we received a comment from Kalandria correcting our identification and indicating that the Cobweb Spider is Steatoda triangulosa which we verified on BugGuide.

Katydid eats and gets eaten!!!

Golden Orbweaver with Prey
What's That Bug? does not endorse extermination