Beetle with EYES!
Hi Daniel, We have many different beetles on our land. The one we saw today (photo attached) is by far the most interesting. The body is around 3cm long. Do you have a good online source recommendation to ID future beetles that we find? (Besides your fab site, of course!)
Thanks, Sandra 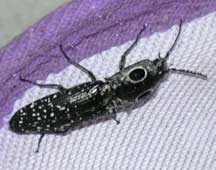 Hi Again Sandra,
We are still trying to get a positive species identification on your green horsefly. Your beetle is an Eyed Elator, Alaus oculatus. These are members of the Click Beetle family Elateridae. According to Dillon and Dillon: “If, by accident or through human agency, one of these beetles finds itself upon its back, it has a very singular method of righting itself. The body is bent upward on a loose hinge between the pro- and mesothorax. Then, with a sudden snap, it bends itself in the opposite direction with such force that the whole insect is tossed several inches into the air, turning over and over as it goes. Occasionally several trials are necessary, but it is amazing how frequently the insect will land upon its feet the first time.” The “eyes” are not true eyes, but in fact markings which might startle birds or other predators into thinking the beetle was larger or fiercer than it actually is. The larvae are called wireworms. Adults are usually found beneath the bark of dead pine trees and are common in the southern states. Though we do much online searching for identification, we don’t really have a beetle site we visit.

Thanks for the fast response. Wish I’d know about the flipping part. Not to be cruel to beetles, but I’d have loved to see it! I’m sure there will be another time. Maybe I can catch it on film. I knew they weren’t real eyes! I don’t think it would stop our chickens from picking on it. They are young & into everything as they have just started free ranging. Unfortunately, the diversity of insects we see at the barn is diminishing the larger the hens get. At least we only have 7 of them, they can’t eat everything!
Thanks again,
Sandra

Whirligig Beetles in Tanzania
What's That Bug? does not endorse extermination