Tiger Beetle: Cicindela campestris Newly Emerged Ladybird We just photographed this yellow ladybird beetle which just emerged from the pupa. By the next day, it had turned orange with black spots.Are these Ladybugs?

Hi Bugman,
In the Slocan Valley in British Columbia there are stink bugs everywhere. My son took these photos. I would like to identify this particular bug so that I can learn what attracts them and how to get rid of them. There are various theories; stink bugs are attracted to light colors, they come into the house with the firewood, they come inside to get out of the cold, they were introduced as a predator for another species, they are naturaly occuring in this area, ladybugs will control them, etc. We are building a small resort and would like to make our buildings stink bug proof. Any info would be greatly appreciated.
Thanks,
Isy 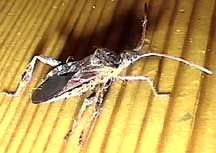 Dear Isy,
You have a Western Conifer Seed Bug. The Western Conifer Seed Bug, Leptoglossus occidentalis was first described in California in 1910 and prior to 1969, it was only known in the Western U.S. Then it started to move East. By the 1970’s it was established in Wisconsin and Illinois, and by the mid 1980’s was found in Minnesota, Michigan and Ontario. In 1990 this species was collected in New York State and in 1992 it was found in Pennsylvania. It is also present in Mexico. The Western Conifer Seed Bug is a True Bug from the Family Coreidae, the Big Legged Bugs or Leaf Footed Bugs. It is a pest on conifer trees. We have no theory about how to keep them out of your resort. That is a question for your contractor.