Found this critter in our yard this year (we live in Texas). Sat down on the garden swing and then found we were covered in them. Have never seen one before. Sort of looks like a cross between a spider (the round torso) a fly (the wings) and a mosquito (legs and stinger like head)? Sorry I couldn’t get a closer pic. The camera wouldn’t focus on the bug and not the leafs that close. Haven’t hung around long enough to see if they sting or not.
Sandra 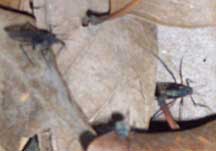 Dear Sandra,
It is difficult to be certain with your photograph, but I’m guessing you encountered a swarm of Hessian Flies, Mayetiola destructor, an agricultural pest in the Midge family Cecidomyiidae. The maggots do serious damage to wheat plants. Adults are small (1/8 to 3/16 inch long), dark or red-tinged, gnat-like flies with long legs and antennae. The insect got its common name, according to Lutz, when the European insect was first noticed on Long Island shortly after the Hessian troops landed there. It is especially plentiful in Texas. Here is a downloaded Photo by C. Hoelscher. 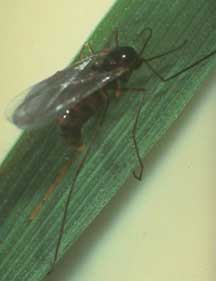 Aggregation of Fungus Gnat Larvae
What's That Bug? does not endorse extermination