HELP! What Are These Bugs?!
Dear Bugman,
HELP! These bugs are driving me crazy trying to figure out what they are and how to get rid of them! They seem to be more of a nuisance to me more than anything because I do not know what they are and I cannot find any info on them to be able to know what they are. I keep finding them on our hardwood floor, mainly along the baseboards, in the hallway between our baby’s room and our room (which are right across from each other). We live in Columbia, SC.
The first time I ever saw one of these bugs was in my baby’s baby cereal box, which I then threw out the whole box after seeing that. After that I started storing her baby cereals in sealed tupperware containers. Then, not too long after that I found a couple of them on the kitchen counter. But, I haven’t seen any of them anywhere in the kitchen since then.
Ok, now I cannot find any in the kitchen at all. I’ve looked through our cabinets and cereals, (we do not have any flour), and I’ve also looked all through our pantry and cannot find any there either. The only place I’m finding them now is in the hallway where I told you, between the two rooms, closer to the baseboards. And I have found a couple on the bathroom floor also. There are a few on the floor in the linen closet, also closer to the baseboards, which is between the two bedrooms in the hallway where I keep finding them.
What really confused my husband and I about these bugs was that one time when we were going through things in our attic, we got out some older VHS video tapes and a few of these bugs had fallen out of the VHS tapes. Then my husband continued to keep knocking the video tapes on the floor and they just kept falling out of the tapes. They were all dead though. Finally, after so many of them, they stopped falling out.
Then when we brought down the box with our Christmas decorations in it, to our surprise, there were all these same little bugs (a whole bunch of them) stuck to, and stuck underneath, the masking tape on the outside of the box. Yuck!!! I kept thinking "Why are these things so attracted to the masking tape like this?!" I’ve attached a few pics of these little creatures that are on my last nerve, one of the pics being of them stuck on the masking tape. So, obviously they’re in the attic also.
Our neighbors have them in their cupboards every now and then. They call them Weevils, but I don’t think that’s what they are. I’ve been looking all over the internet trying to figure out what these things are and I cannot find anything that looks like these bugs. They are like tiny little brownish beetle looking bugs.
I don’t see how they can be Pantry Beetles, because I haven’t been able to find any in the kitchen anywhere. They are driving me crazy, because everytime I pick up the ones that I keep finding on the floor in the hallway between the bedrooms, a few hours later a couple more have showed up around the same spots. And you know, they don’t move unless I nudge them a little.
WHERE ARE THEY COMING FROM?!
WHAT ARE THEY?! AND HOW DO WE GET RID OF THEM?!
PLEASE HELP BUGMAN!
Thank you,
Seriously Curious 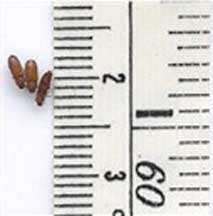 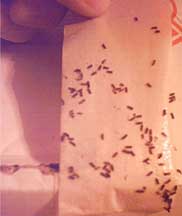 Dear Seriously Curious,
You do have Pantry Beetles, but there are many species, some of which are weevils. You might have the Merchant Grain Beetle, Oryzaephilus mercator, or a member of the genus Cathartus. These beetles are especially a problem in the humid South. These are small elongate reddish beetles that feed on grain and dried fruits in the larval stage, but when they mature, they fly away to a new food source, often pollen. You might have large numbers of adults congregating where they think they can get access to the outdoors, hence the attic. Aslo sticky tape will trap them like fly paper. The larvae will also eat dried pet food or even a forgotten box of cookies in some seldom used closet. Could someone in the house be hiding (hoarding) food and have forgotten it? If they are really that plentiful, you might want to fumigate, though we believe that could do more harm than good.

Spider Beetle
Tagged with → Household Pests
What's That Bug? does not endorse extermination