Ed. Note: October 5, 2010
This past weekend, we really wanted to link to this old posting, but alas, we could not locate it.  Our webmaster tracked it down and it seemed it did not make our major website migration just over two years ago.  We suspect this is not the only missing gem, but the perk that comes from resposting it is that the photo can be greatly enlarged with our new technology.

Banana Spider!
(11/10/2003) Unidentified Spider from Puerto Rico
Hi Bugman,
While staying in Puerto Rico two summers ago, my boyfriend caught this freeloader living in his apartment without paying rent. Do you know what kind it is?
Thanks,
Jennifer & Donny 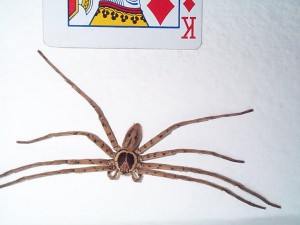 Dear Jennifer and Donny,
First let me say yours is one of the most beautiful photos we have ever received. Thank you for sending the image of a male Heteropoda venatoria, also called a Banana Spider. The female is a more robust spider with shorter legs. This is the spider that is responsible for the rumors that tarantulas come into the U.S. with bananas because they are often spotted emerging frrom a bunch of bananas in a fruit store in the North. This Giant Crab Spider is usually the culprit. The species is found in all tropical regions, its range extending clear around the world. It is very abundant in all tropical seaport towns, being transported in trading vessels. Its chief food is cockroaches. The female carries her eggs beneath her body. According to this site it is also called the Huntsman Spider.

Orbweaver may be Cat-Faced Spider