I’m in Toronto, Ontario, Canada and this bug has been living in my apartment with me for quite some time. it seems quite content to just chill out on my rather large ivy plant, in the window. it’s moved about 6 inches in total in the last few weeks. i know it’s alive because it will move if i breath on it. here are some links to the photos I’ve taken of it. Is this a stink bug? 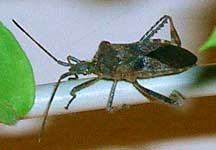 Dear Adrian,
You have a Coreid Bug or Leaf Footed Bug, so named because of the large rear legs on many species. More specifically, it is a Western Conifer Seed Bug, Leptoglossus occidentalis. They are plant feeders and are usually not noticed until they seek shelter in the home in the autumn so they can hibernate. They are plant eaters and are related to stink bugs, hence the foul odor they emit. There is no way to prevent them from seeking shelter, but they will not breed indoors. They just want to hibernate.